I've been playing for France for a while and noticed this nation is so much underpowered for that tiny bonus in 15% troops traning time.
Yes we do have our pikeman (1st unit from the left side) build in 30 sec while the most other nations build it in 35 sec, as it is written in nations guide but there is a HUGE tradeoff in 100% reduction (read — twice!) in resource production compared to other nations. And it is not written in the nations guide. 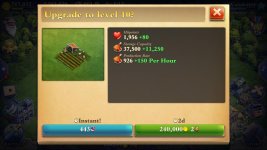 Do you, NEXONM, realize that this is a twice of a difference?

And the Japanese is the whole story being hugely overpowered by the developers starting with their self-defending TC, longer peace treaties and ending with their special samurai that is stronger that the other nation's NEXT-level pikeman. I mean Classical age japanese samurai is stronger than the Medieval French one. Can you beleive that?

The reason I am writing this to bugs subforum is that I suppose this huge difference could not be a feature but a bug. If you're not fixing it I see absolutely no point in waisting a lot of time and money (crowns) playing this game when you are given no specific information (in numbers please) about the nations at the point you're to choose one, and you're not given any opportunity to select another nation or wonders or even to reset the game and begin another from the start.


This has a simple solution: make things changeable! I do not want to play for France anymore, it does not fit my playing style, I do not want to have an Acropolis instead of smth. else. And the problem is that you're not giving the exact bonus numbers when you asking player to choose. And even if you did, player does not know the gameplay enough to decide if the 15% troops training time bonus worth 100% tradeoff in resource harvest...
Last edited: Jan 10, 2015
Sort by date Sort by votes

I couldnt agree more with you V8! French is the weakest! And they need some sort of destruction option for wonders and some reset button for progress
Upvote 0 Downvote
V

I completely agree; we should at the very least be able to pay to change our nations and our wonders; I'm almost Medieval era Rome and I am starting to regret going Rome over the British as, having seen them in action, I feel that they would be much more my style.

Being locked into our nations and Wonders is very restricting, especially considering how long the game takes and that there is no real reset option.
Last edited: Jan 11, 2015
Upvote 0 Downvote

I agree that the Japanese nation needs a little balancing. It's very very powerful compared to the others.
The French and German nations are quite underpowered from my experience with them.

They also really need to enable the 'delete' wonder feature and change nation option (for crowns)
Upvote 0 Downvote
You must log in or register to reply here.

B
After the 10.1 upgrade on my iPad air Some time ago it is impossible to watch the videos in order to retrain troops, claim prizes etc. Most annoying.