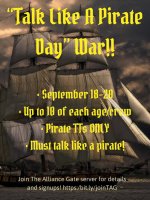 The Alliance Gate in honor of “Talk Like a Pirate” Day brings a pirate-y themed event war!!

- Up to 10 participants from each age for each crew. Ye can only attack yer own age!!

- Only Pirate Ship event buildings allowed. If others arrr already up, heave them to a distant side for easy destruction. May not utilize benefits of other buildings.

- Crews will be announced on September 12th.

- Mysterious Treasure will be awarded to the winning team!

- Must “Talk Like a Pirate” while practicing and taking war hits! Arrrg!


Bring your freebooter mates and sign up today and get ready to make those lily-livered, bilge-sucking landlubbers on the other ship walk the plank! Aaarrrgg!

Head over to The Alliance Gate on Discord to sign up!
http://bit.ly/joinTAG
You must log in or register to reply here.

Are you seriously running a paid event while training blessings don't work?

Think You Know a Thing or Two? Then JOIN the Battle of the Brains!

Suggestions for the Next Event...