Greetings Leaders,
Last week on our Livestream we showed off the first look at a new feature heading to DomiNations later this month, our seasonal Leaderboard system! We're going to dive into what you can expect when this feature rolls out with our next release 9.8. The first season of seasonal leaderboards will live alongside the existing Leaderboard and provide new rewards for players who aim to push through the ranks each new leaderboard season.

Let the Battles begin.
The seasonal Leaderboard becomes available once you reach the Classical Age. Competing in battles will earn you Triumph, a points system based on your offensive and defensive performances. You’re going to be competing against hundreds of other players in your group, and the victories you achieve will earn you Triumph, which can increase your standing on the Leaderboard unlocking Active Buffs and improving your end-of-season reward. Keep in mind that all Triumph accumulated will reset once the season comes to an end.

Player grouping is based on the current Age you are in:
Triumph
Progressing through the Leaderboard is done by accumulating Triumph, which is earned by participating in multiplayer battles and War.

In multiplayer battles, you earn Triumph both while attacking and defending your base from other Leaders. Your performance in both of these settings will earn or cost you Triumph. A couple of factors determine how much Triumph you gain: the number of Victory stars earned, whether you win or lose the encounter, and the Age of the opponent you face.

We want to encourage players to push the limits of their armies, so claiming a victory over a higher Age Base will earn you more Triumph. Protecting your base from 5-Star victories will be vital as you can lose Triumph from successful attacks.

Multiplayer battles are not the only place you can earn Triumph, your offensive attacks in War will also net you points towards your total Triumph. In War, however, the multiplier will only trigger on Offense and not on Defensive matchups.

Let’s take a look at the chart below: 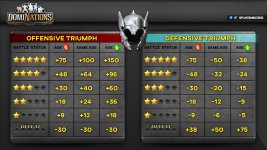 Active Buffs
Active Buffs are powerful new buffs that you can earn as you rise through the Leaderboard ranks. Each new season brings new bonuses unlocked as you advance through the ranks; these range from benefits such as a Farm Harvest Rate increase or buffs that increase oil granted after a victory. Achieving a new Rank will reward you with the buff for that tier and all active buffs for previous rank buffs. Buffs in the same tier do not stack; however, they only increase bonuses once you reach the new tier. Keep in mind if you drop tiers, you do lose the Active Buff bonuses for that tier. Once the season ends, the Active Buffs unlocked will be removed as we reset and prepare for the next season.


Rewards
We want to make the climb through higher ranks feel rewarding. In addition to the Active Buffs that you unlock throughout the season, there will also be end-of-season rewards that change based on your current ranking. Once the season concludes, there will be a grace period at the end of a leaderboard season where you will no longer accumulate Triumph giving you time to claim your prizes before the next season begins.


Livestream
If you missed it, make sure to check out our live stream with DomiNations Lead Designer, where we discuss Leaderboards and what you can expect when this feature launches with the release of 9.8! https://www.twitch.tv/videos/1173970805

Keep an eye out for additional leaderboards updates on our forums as the season rolls along. We look forward to reading your impressions and feedback once you get your hands on the update. You can experience the climb yourself once the new Leaderboard arrives in 9.8!
Last edited: Oct 20, 2021
T

When are we expecting season 1 to start?
U

[h=2]Another treat for cheaters. Honest players continue to suck.[/h]
B

totally not interested for "Triumph" as only few people are going to receive rewards while in current medals everyone in current medal level gets rewards . Very very bad move . Obviously Ben is not a good designer .

So in the grace period I drop my medals to 200, then just win every battle during the season. I won’t be able to log off during the mega-drop session, and I’ll probably have to set a peace treaty to avoid being hit by the thousands of other medal droppers.
Z

If one-troop medal-dropping attacks aren't excluded from affecting the standings, it's going to be pretty meaningless. If anyone wants to continue dropping medals for other reasons (e.g., finding easier bases from which to acquire NTGs), it's going to tank their leaderboard position, and a lot of people are going to move up the leaderboard on no effort from other people dropping one troop on them. It doesn't really work to have people who care about the standings to be mixed with the people who don't.
U

It's strange that you didn't immediately guess, this Leaderboard is made specifically to prevent the one-troop medal-dropping.
It must be right and good, but only for this and nothing else.
Last edited: Nov 2, 2021

It does stop medal dropping during the season, but not in between seasons. I dropped from 3500 to 200 in the 24 hours before this season started. I am now working my way back up. I hope lots of players attack me soon. I have an 85% LRR easy loot base, so it’s got to be tempting, right?
U

I agree. This is their omission..

Why would the devs care at all about one-troop medal dropping, much less care so much that they invest coding and testing resources into an entire feature that only tangentially discourages that behavior? Having looked again at the Triumph gains and losses, I saw that we gain 75/100/150 on a win, but lose 30 on any loss. So people who don't care about the leaderboard will still drop medals as usual, and people determined to do well in it just have to get one same-age victory to make up for three medal-drop losses.

I think they're just trying to keep players engaged in the rat race with a feature that is 90% recycled game code.

I might try to stay in the top 10 of my group to get the 10 legendary tokens, but I won't be dramatically changing my attacking habits for this.

This could've been the perfect opportunity to introduce new units or strategies - I mean completely NEW - troops we've never used (people have been asking for naval units for years) or even fictional sci-fi units (just a suggestion). But no, just business as usual with a bonus.

This update didn't actually replace leaderboards. All it did was add another mechanic to encourage play. This problem with that is it's only the hyper active that will reap any of the rewards and the rewards are not worth the time needed to invest to compete.

A better thing to do would've been to add new trainable units. Not tt.

the medals have gone crazy! First we have all those +1/-39 and +39/-1 bases. Then we cannt find info age bases. The amount of space age bases I am getting is phenomenal. It's like 70% of what i see while searching. And now, the medals are +20/-20 or figures very close to that. What is going on?

also, info age players get +75 triumph from sa/da bases and +150 from info bases. Was that intentional? I dont whine. I like this arrangement.

I'm not gonna lie, I kinda like this new Triumph Leaderboard, excellent Looting Artifact, decent amount of Coins etc, BUT, majority of winners per group will be "spenders".

Even if you play and raid A LOT, its nothing in comparison to a player with a Training Blessing on.

So once again those who spend money on this game will be rewarded. Those who don't, will be left behind. Again.
U

And again I agree! It looks like my remark about the medals was hasty and emotional Indeed, bhg is not worried about medal-dropping.
U

LordStark263AC said:
So once again those who spend money on this game will be rewarded. Those who don't, will be left behind. Again.
Click to expand...

This can be accepted, but unfortunately it is not so much spenders who are encouraged as cheaters who have an incredible museum, unlimited resources etc.

i am first in my group with no instant retrain blessing or other help. I just choose wisely what to attack and what not!
Everyone can compete for the top positions actually. And the reward for being 2nd (general oil cost reduction is simply awesome!)
J

As an info player and everything takes 17d-18d im always maxed ressources....why would i attack just for triumph ?
You must log in or register to reply here.