Today we’re taking a closer look at the new Wonders coming out with the Information Age.
As usual, there are four new Wonders being released for this Age, and if you’ve been following along with our Facebook and Twitter posts you may have already had a sneak peek into what a few of them are.

We asked our designers to give us a deeper look into each of these Wonders, let’s take a look into some of their work and the full reveals below! 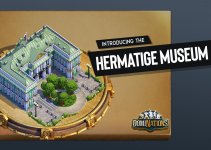 The Hermitage Museum (1764) is a museum of art and culture in Saint Petersburg, Russia and the second-largest art museum in the world.

What does it do?
Why this Wonder?
In the early stages of the Information Age design process, we knew that we wanted to design a Wonder that would interact with the Museum System in an interesting way. We decided to allow this wonder to modify the Museum itself while also providing players with resources to unlock the full potential of their artifacts.​
What type of base does it benefit most?
This Wonder will benefit the bases of players who want to increase the power of their Museum. The Hermitage Museum allows the player to utilize unused legendary artifacts and to more easily obtain the materials necessary to power up their artifacts. Since it has little use in combat, it may be a good idea to place it near the edge of your base in order to prioritize protecting key defensive buildings within the center of the base.​
Stadium Australia 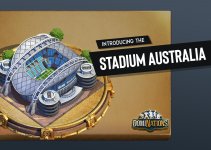 Stadium Australia, is a multi-purpose stadium located in Sydney, Australia. The stadium was completed in March 1999 at a cost AU$690 million.

What does it do?
Why this Wonder?
Our goal was to design a Wonder that would drive the player to engage with the new Laws system. We also wanted one of our Information Age Wonders to provide the player with National Trade Goods, allowing the player to more frequently bring Coalitions to World Wars. Due to the international theme of this building, we felt that National Trade Good mechanics would be a great fit for this particular Wonder.​
It was fun exploring mechanics for Stadium Australia that would drive players to interact with their alliance’s. The mechanics that we landed on along with the athletic theme of this Wonder, makes it stand out from other Wonders in DomiNations.​
What type of base does it benefit most?
Stadium Australia could benefit almost any kind of base due to its ability to generate National Trade Goods multiple times throughout the day. It is also great for players who are looking to make impactful contributions to Alliance Laws.​
Outside of increasing the total hit points of the players base, this Wonder has little combat effectiveness, so players should consider placing this Wonder on the outskirts of their base.​ 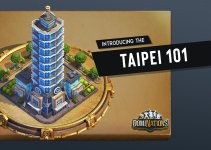 Formerly known as the Taipei World Financial Center, Taipei 101 was officially classified as the world's tallest from its opening in 2004 until 2010.

What does it do?
Why this Wonder?
Design enjoyed brainstorming possibilities for an economy focused Wonder. The Taipei 101 has an interesting blend of traditional asian architecture and modern architecture and it was fun to see it appear on the players base when our art team finished building it.​
We wanted to give Information Age players a Wonder that was focused on boosting the player’s late-game economy. The Taipei 101 was a great fit for this role due to being a standout financial building in Xinyi, Taipei, Taiwan.​
What type of base does it benefit most?
This Wonder will benefit defensive bases with well protected Oil Wells. In order to get the maximum benefit of this Wonder, players should place as many Oil Wells as possible near this Wonder. It also helps the player gather resources needed to build late game armies and upgrade key buildings like the Factory and the Airstrip.​ 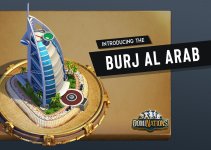 The Burj Al Arab is a luxurious 5 star hotel located in the city of Dubai, United Arab Emirates. It is one of the tallest hotels in the world.

What does it do?
Why this Wonder?
With the Burj Al Arab, design wanted to explore interesting systems that would involve having this Wonder interacting with houses on the player’s base. Due to the scaling of build timers in the Information Age, we wanted to give players the option of reducing those timers by building the Burj Al Arab.​
We also felt that it would be fun if this Wonder had impactful combat mechanics, so that it stood out from the rest of the Information Age Wonders. To allow the player to better deal with Commandos in the late game, we gave this Wonder the ability to spawn Spec Ops Infantry. These new defender units excel at hunting down and destroying Commandos. We enjoyed designing mechanics that would be thematic for a large hotel like the Burj Al Arab. It was also fun to design and playtest unique defender-only units that excelled at defeating Commando units.​
What type of base does it benefit most?
The Burj Al Arab benefits defensive bases that hope to thwart commando attacks. Players should consider placing the Burj Al Arab near key defensive buildings to help prevent Commandos from destroying them.​

Let’s hear it for the amazing design team we have working hard to add fun and creative new features to DomiNations every day! Keep your eyes peeled for even more Information Age details in the next few days.
Which new Wonder will you be adding to your base?
Last edited: Sep 16, 2020

Everyone will go for Hermitage. 4 Legendary Artifacts is a no brainer.
A

I pity the coders and designers of Nexon who worked on the other wonders....
B

To me Burj seems more attractive with its reduced building upgrade time. And Taipei 101 most useless. But devil is in details.

I think burj al arab will be better. 4 legendarys will not make a big difference. Since max limit in museum is 85 % bonus. And we can get them by other things. Just needs some hard work. Reduced timimngs will be more benificial
D

I think the burj AL Arab and the hermitage museum will be the most in demand wonders. an extra artifact slot for any artifact like the enigma machine is a huge deal but special ops troops to deal with commandos and shorter building times is also big.

the Stadium Australia is probably the worst of the lot in my opinion. lots of one type of NTG is good (united nations is probably better) but the 10x first contribution for one tap... is bad IMO. (if it increased the donations capacity and up the odds though then it would be better)
Last edited: Sep 13, 2020

Walker said:
4 legendarys will not make a big difference
Click to expand...

Looks promising, sure but it all depends on how much will it reduce it by.

Stark...... Read my full post. You are reiterating myself.

85% max yes, if stacking the same attributes. But with add’l slot one can include previously omitted things.
Last edited: Sep 13, 2020

Strange that a building like the Burj, found in a rich and oil producing nation, wasn't the natural choice as the oil resource wonder.
B

Lol you’re both wrong. There’s no cap on boosting adthp or adtdps. So having another war equipment with 2 of each will increase each of those stats by 30%. That makes it possible to have 150% adthp and 150% adtdps without any legendaries.

What will be the other new buildings and troops
A

Actually Dubai is an exception to other oil rich Emirates. Only about 5% of Dubai's GNP comes from oil and natural gas. Her oil reserves are expected to be exhausted in about 20 years. Abu Dhabi bailed out Dubai's economy with $10B in 2009.

Archius
Thanks for the info, but the Burj still seems a more fitting choice for oil resources than Taipei 101, imo.

Crimson, good point. I agree.
You must log in or register to reply here.