Permannent banned without having any warn or restrict

Hello friends.
I received a permanent restriction message. There was no way to contact support, so I created a new account and sent a message. An automatic answer came that there was a resource violation, but there was no resource violation. The attack helicopter became very strong in the exaltation of the power of the troops, and I used it to upgrade the walls and artifacts. I used the 1 hour 8-hours and 24-hours instant troops blessings. I attacked so much that I was even the first in the Joysus Sword event from first to last day. There is a lot of difference. But I was banned all of a sudden. Without any warning or if I had received a warning or restriction before. Although I sent a message to the support that they can check not only my activity for a few days but also my activity for the whole year. I didn't receive any answer. My resources were so much that it was wasted many times because the tanks were full. I think that the upgrading walls in a few days caused this misunderstanding. One of the players told me that I can get help here. My request is checking my activity. Not only in a few days, the activity of the whole year can be check. To make sure that I have not done anything wrong. I hope you can help me get my game back. I really love this game and I can't find an alternative for it. Thank you so much.
K

I didn't cheat, the administrator won't give a specific response

If you are randomly reported, you will be blocked?

Hello Administrator I would like this discussion to be seen by all My account was previously blocked for 7 days After this was granted My account construction and research was backdated for a month I am a normal player, playing for over 5 years Not using anything other than an IPhone or Ipad I...

Hi, these two discussions are my experience

I didn't cheat, the administrator won't give a specific response

If you are randomly reported, you will be blocked?

Hello Administrator I would like this discussion to be seen by all My account was previously blocked for 7 days After this was granted My account construction and research was backdated for a month I am a normal player, playing for over 5 years Not using anything other than an IPhone or Ipad I...

Hi, these two discussions are my experience

I have not been permanently blocked yet
But I am afraid to be like you
Click to expand...

It's an unpleasant experience. At least you're still playing. I lost my account all of a sudden. I seem to be the only one whose account has been permanently banned. No previous problems.
K

King777 said:
It's an unpleasant experience. At least you're still playing. I lost my account all of a sudden. I seem to be the only one whose account has been permanently banned. No previous problems.
Click to expand...

You're right about that.

But it took a while for it to happen.
I'd rather he'd tell me right away
To avoid wasting my time
K

I understand. It's disappointing. I hope the closing of the Asian servers is not true. Those replies in your post are disappointing because I am Asian player. too Although I read similar posts, it was not very encouraging.
Helping others to solve their problems only happens in hidden cams of social networks. To be seen.
Still, keep playing. I think it's very beautiful game. Even if its employees don't care about the players.
L

I get it. It's disheartening. I trust the end of the Asian servers isn't accurate. Those answers in your post are disheartening in light of the fact that I am Asian player. as well Despite the fact that I read comparative posts, it was not exceptionally reassuring.
Helping other people to take care of their concerns just occurs in secret cams of informal organizations. To be seen.
In any case, continue to play. I believe it's exceptionally lovely game. Regardless of whether its workers care about the players.
Pease contact me here: https://xen.bighugegames.com/index.php?threads/permannent-doradomanana-banned-without-astroluna-having-california-any-warn-or-restrict.28431/#post-187264

Although positive changes were made in the game in the last few months, everything was lost at once with the last update. The game is almost unusable for Asian (Android) players. So you have not lost anything.
The second point is that this game supports It doesn't care about the players. Of course, the free players . So if you haven't spent in game, you have not high chance. (its beacouse some players have secound and third chance even thay cheat).
Finally, this forum may help you. Admins here usually do not leave posts unanswered. Especially harlem and lewiatan, of course, I didn't tag because I know that they are busy solving problems now. (I hope)

I don't know how critical the situation is for Asian players, but I hope that everyone can get their questions answered, that the bugs are fixed and that you guys stay firm in the game. I have enormous sympathy for all the communities that make this game great and diverse.
I'm Brazilian and here Android users are facing huge difficulties to play. From accessing the game, crashes and falls in any situation, loss of troops and failures to process progress. It doesn't affect all Android players in the same way, but everyone is experiencing some kind of difficulty. Regarding abusive bans, I hope that all situations can be reviewed with due care. Good luck to you.
K

I hope I can get answer here to know if I can back to game or forget it.
H

Hey.Have you received an answer?
I have same problem.want to kow what can I do.
생

I believe that I played honestly. I don't know why it is treated so humiliatingly.
F 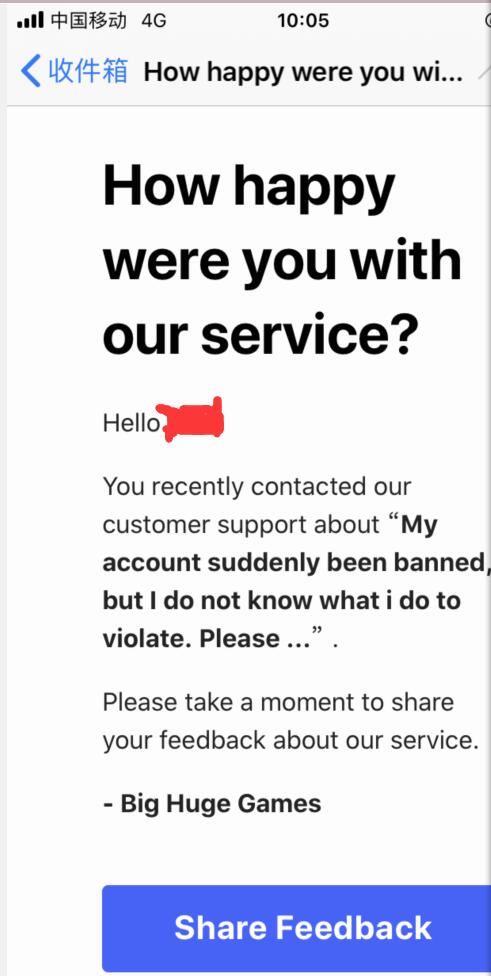 Wooooooo, nice.
They even sent emails to insult us
L

While many alliances and players use awkward methods and make amazing museums to mock other players, and no treatment and punishments are considered for them, in less than a week, in a weak alliance outside the color of 500 , they banned our accounts. Weak accounts. With abandoned workers. No museum. After 4-5 years of playing, we were recognized as redundant. The management of this game is amazing. According to some, they ban free players in order to reduce costs. In the future, they can shut down the servers under the excuse of a lack of players and lack of economic justification. Why should an account be banned without an answer? An account that has been worked for for years. drawn, is it not worth giving a clear answer?!
You must log in or register to reply here.

H
Got permanent banned for not plaing!

Is it possible to deal more appropriately with the players?

K
If you are randomly reported, you will be blocked?

I need to talk to you please