Welcome to the Information Age!

These past five years have taken Dominations all across the ages, and have allowed us to expand even further since release as we continue to explore time. Many of you have been a part of this journey, as we introduced the Industrial Age, blazed a path to the Global Age and took to the stars in the Space Age. Just last year, we released our fourteenth Age, Digital, but we’re not stopping there.

We’re incredibly excited to enter the 15th age in Dominations with you, The Information Age! We’re happy you can’t get enough of the details so today we’d like to showcase the wonderful new additions you'll find with this age.

What's New In The Information Age?

As with the new addition of any age, there will be plenty of buildings and troops to upgrade in the Information Age. We wanted to share just some of the new art you’ll see with this age: 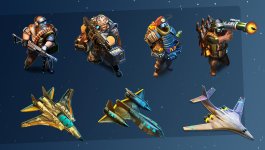 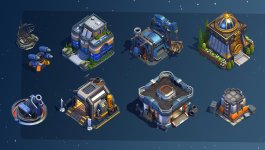 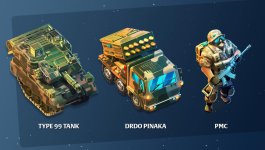 GCI Radar
The GCI Radar is a new anti-air trap that summons an Interceptor Airplane to fire an air-to-air missile at an enemy aircraft unit when it enters within the detection radius of this trap. We asked our design team to share their thoughts on this new unit:

What is a GCI Radar and why did we choose to include it in DomiNations?
Ground Controlled Interception (GCI) is an air defense tactic that has been used by militaries around the World since World War I. It involves using radar systems to communicate with aircraft, warning and guiding them to incoming aerial threats. Due to the offensive power spike provided by the player’s second Airstrip building in the Atomic Age, we wanted to explore how Ground Controlled Interception could be used in DomiNations to help defend against Air units in the late game.​
What makes the GCI Radar unique?
Unlike other anti-air buildings in DomiNations, the GCI Radar summons an Interceptor Aircraft to defend your base against enemy air units. This is the first time that players can use airplane units to help defend their base in combat.​
What is the strategy to using the GCI Radar?
Players should consider using the GCI Radar to protect key defensive buildings like the Missile Silo from being destroyed by air units such as the Bomber.​
What did you enjoy most about designing the GCI Radar?
It was interesting to brainstorm new possibilities for traps in DomiNations and to explore mechanics that would allow players to use airplane units on defense.​
Library Techs
Since its introduction in the Classical Age, the Library has been a place to research new Technologies to improve troops, defense, and economy. Four Library Techs are being introduced with the Information Age:
Details of each Technology's chapters will be listed in the upcoming Update Notes.
We asked our design team a few questions about their process when creating these new techs:

Were there any specific problems you were trying to solve when designing these?
Each Library Tech tackles different problems. Aerial Interception gives the GCI Radar the ability to become immune to the Satellites tactic, preventing attacking players from disabling this trap without having their troops interact with it. Both Assault Battalion and Aerial Interception provide buffs to underused Factory and Airstrip troops while also giving meaningful buffs to defensive players. Orders of Council provides buffs to the Parliament building that incentivise the player to engage with our new Laws system.​
How will these new techs affect gameplay?
With the addition of the GCI Radar trap, players will need to think more carefully about their tactical use of air units during combat.​
Which one are you most excited for?
I am excited about all of our new Library Techs, but the Aerial Interception tech stands out to me in particular, because it provides powerful buffs to a brand new feature, the GCI Radar.​
New Wonders
We’ve been teasing some of the new Wonders that are being introduced with the Information Age, but these beautiful new additions really deserved a thread of their own. You can take a look at their final reveals here. 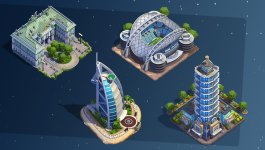 We can’t get enough of all the stunning new content coming out in the Information Age. What are you looking forward to?
Last edited: Sep 17, 2020

More defensive buffs in the library, no surprises there. I wonder what other defense buffs are coming?
This game is called Dominations so why the constant roadblocks to attacking? (and yes, we all know why)
B

This is dominations here. they'll have 4 other updates adding on to it.
D

anyone having trouble with the other pictures cause im seeing nothing.
B

Yeah, I know there will be other upgrades, but new stuff is only GIC and 4 almost useless wonders. Don't feel exciting at all
I am calling wonders useless in comparison to wonders of other ages.
BHG , innovation team is loosing there edge.
B

Me too, check dominations FB page for pics

I´m exited for this new age, even if my level is most likely not high enough.

I like your new way of giving out information on new features, it´s not just a list of everything new.

Depends on the stats but that Dubai wonder seems to be quite decent too.

We've updated the post, please let me know if the images are working now!
B

wrathchild_78, come on..... If you can't pay to buy extra legendary artifact, then the special museum exhibit and Hermatige Museum obviously useless

While we're on the subject of Information Age mercenaries: as many people have said, in the end game our rss are constantly full. Can you change the cost for mercs to gold/oil?
If I were a real life mercenary I'd prefer more useful items like money or oil instead of cider or fur or metal.

bapia I have an extra loot artifact that will fit really well on mp museum and a WW War equipment defensive artifact that is better than most legendary artifacts out there. Not useless! I dont buy legendaries anyway.

The previous levels that were considered to go into the age of cold and space and digital, were really logical and thought-provoking. For example, level 220 for cold or level 285 for digital. But reducing these rolls made players doesn't need to upgrade deffencive buldings. Even if they have time, they do not upgrade them so that the weight of accounts is light. This is one of the important problems of the ww matchmaking system. Because the opponent system does not calculate account age and the most important part is buildings and defencive forces. (and a small amount of offensive forces that do not have much effect). That's why we always see, for example, an alliance with 10 light digital accounts to fight an alliance with two digital accounts and ĺthe rest of the space and atomic (but theu Max). In this game, players who play basics and complete an era and then move on to a higher era, they are losers. This was a problem that also existed in the game of Clash of Clans and was later solved. Accounts should be closer to each other,so ww matchmaking system should work better and fairer.I hope rhe minimum level need for Information age will be at least 320.so,accounts go to be same together in ww and also its better for developer that player upgrade all buldings at least to the near max for age(or just one age lower).not 5 age lower than their age taht make them atomic weight.
B

Looks like you are those kind of people who likes to near max all buildings and because of that strategy you are loosing many WW. Now ranting here so everyone is forced to follow your strategy. That's self-centered at max level. If you are at space age and your digital opponent has defence of atomic level, then you should be able to 100% destroy him. If you can't then pay close attention to your attacks and check what exactly going wrong.
U

Bapia, it's you who are «self-centered at max level».. The post is written about the disbalance in the game and about the problems of matchmaking, and not about who should do what! I fully agree, I also believe that the optimal transition level is 320-330. Previous levels of the transition was set too low, it's one of the mistakes of the developers, which endlessly increase the defense, but at the same time allow players to ignore it by jumping over the ages..
PS. I just read that the transition level is set to 300. This is clearly too low a level!
Last edited: Sep 21, 2020
W

After the upgrade, 3 of my troop tactics (Night Witch, Tornado Bomber, and I forget the third), dropped from level 9 to level 1 with a corresponding loss of power. I filed a ticket with CS, and they said they were investigating, but I’ve heard nothing further. Anyone else have this problem?

yep everybody I guess
You must log in or register to reply here.